An inside look at the innovative new product that could change the game of chess forever.

Have you heard of Square Off yet? It was a hugely popular idea on Kickstarter, getting fully funded in just 6 hours! That’s impressive by anyone’s standards. Essentially, Square Off is an electronic chess set, but it can do so much more than your average digital board can. In many ways, the Square Off chessboard is like a modern mechanical Turk machine – one that actually works!

You see, not only can the Square Off board analyze your games and offer a variety of challenge settings for you to test your skills against, it can also connect you with other players anywhere in the world – and it actually moves the chess pieces for you! So, you can play with any other person who has the Square Off board and an internet connection, no matter the distance between you, and you can actually see their moves being made on your board in real time! How amazing is that?

The Square Off chess set represents a definite breakthrough in technological advancement and it’s also a very cool idea. It would be perfect for long distance couples or family members to sit down at the same time and play a game together to make the distance between them feel a little bit less. It’s even useful at smaller distances, for instance if your child comes down with the flu and isn’t able to visit his grandparents for fear of spreading the illness, they can still play a game of chess together, keeping spirits high and providing a little intellectual stimulation, even when you have to miss school.

The Square Off chess set is the invention of a company called Infivention, whose motto is, “we create robots that move you.” Their mission as a business is to combine telerobotics and AI in new and innovative ways that make them feel more human than mechanical and provide ways to draw people together, rather than isolate them. That’s a noble goal to have, as we’ve seen in recent years how technological advancements can sometimes be a double-edged sword. 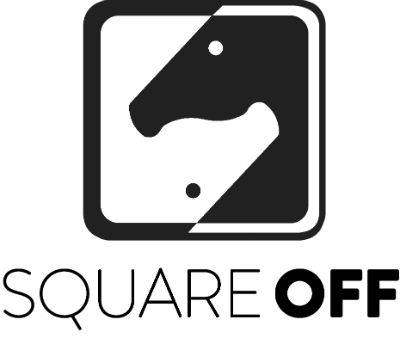 Take the now ubiquitous smartphone, for instance. On the surface, it seems like something that will invariably draw us closer together, making us able to contact anyone – anywhere, anytime. However, new research continues to show that our dependence on these devices may be causing harm to our social skills that we didn’t realize was happening. Everywhere you go, you can see people looking down at their smartphones rather than being fully present and invested in the world around them. It just goes to show you that the consequences of innovation can be difficult to predict, but a thoughtful focus on bringing people together with your inventions rather than apart is a good place to start.

The Square Off board was actually originally envisioned, way back in 2013, as a product designed to help visually impaired people better and more easily enjoy a game of chess. The blind and visually impaired are a group that can easily become isolated in our society if care is not taken to include them and make accommodations for their unique needs, so this idea is well inline with the company goal. As the idea grew in popularity, they started to see that people of all abilities loved it and wanted to have access to it, and so the Square Off chess set was brought onto the market.

The chess set itself is a sleek, simple wooden set with a timeless look. It has a beautiful Rosewood finish that gives the board a rich, deep brown color. At a glance, you may not even realize what this board is capable of! It definitely looks like a normal chess set for the most part. The only things that give it away are the small, silver power button on one side and the inlet for the charging cord in the adjacent corner.

The board comes in two different versions – one called the Kingdom set, which is about 18.5 inches square with 1.5 inch squares, and one slightly larger version called the Grand Kingdom set, which is rectangular (18.4’ x 24.4’) and features two extra panels on the sides of the playing surface which provide a designated place for each captured piece. The square size and actual playing surface are the same size on both versions of the board. The pieces are quite petite, fitting easily within the 1.5 inch squares of both boards. The King stands only 2.5 inches tall. Square Off – The Kingdom Set

The larger Grand Kingdom version also includes an auto-reset feature which saves you time. At the end of the game, all you need to do is press a button, and the pieces will start moving themselves back to their designated places, as if by magic. You’re free to walk away from the board and go about your day. When you come back, it will be reset and ready for another game, all without you needing to lift a finger!

These boards are battery operated, so you don’t need to worry about having them plugged in all the time while you’re playing. A single charge will last you about 15 games on the Kingdom set or 30 games on the Grand Kingdom set, which features a larger battery and greater charge capacity.

The majority of the technology is housed within the chess set itself, but the app is what makes everything work smoothly. Once you download the free app for iOS or Android, you can use the board to its full potential by challenging other players or trying your hand against the board itself. The board is powered by Stockfish 8 chess software which has a variable ELO rating from 800 to 3000. You can choose the difficulty that’s right for you.

If you want to play against a human opponent, you have several options. If you know someone who also has a Square Off chess board that you’d like to play against, you can arrange to face off against them through the app. What you’ll do is go into the app, choose your opponent, and then choose a time that works for both of you. It can be immediately or sometime in the future. Then, at the appointed time, all you two have to do is sit down at your boards and start playing! This is a great system both for playing quick one-off games or for setting up a regular “chess date.” You can also challenge any one of more than 21 million online chess players through Square Off’s partnerships with multiple chess apps. They are currently working on adding more partnerships, so that number is likely to grow soon. The app includes an instant play button that will match you up with the next available player, so you’ll never have to wait very long.

We do have some initial concerns about how easy it would be to start a game if you don’t know someone else who also owns the Square Off chess set. While the product gets off the ground, it’s unlikely that a large enough number of people will own these boards for matchups to happen in a timely matter. It’s not explicitly stated on the website, but we think that pairing up with an online opponent doesn’t require them to own the Square Off board, which would solve this problem.

Overall, this seems like a very cool idea and it’s great that technology has advanced to the point where we can make it a reality. Humanity has been fascinated by the idea of a self-playing chess board since at least as far back as the 18th century, but it wasn’t until recently that we developed the technology to make it actually work.